come walk with us…

Our first month in Luleå

Here’s a slide show of our first month in Luleå! Hope you enjoy it!!!

The girls are doing well in school. Thanks for all your prayers. They both enjoy going and we’re starting to hear a little bit of Swedish from them. Yesterday, we were goofing around and Jensina said her first Swedish sentence. “Sluta nu!” Stop now!  When she came home from school, she was excited to tell us that she told one of her school mates about Jesus. Even though it didn’t go as well as she was hoping, we are so glad that she wanted to do this. Please keep them in prayer as they live their lives in front of their friends. –Gwen 🙂

It’s surströmming season and we did it!!! We ate surströmming!!! All four of us!!! So what is surströmming and what’s the big deal? It’s a northern Swedish dish of  Baltic herring that has been fermented! They catch it in the spring and store it in a brine in barrels for a couple of months to start the fermenting process. Then, it is canned where it continues fermenting until it’s eaten. If you’re smart, you’ll open your can of  surströmming outside! It does have an awful smell that permeates everything. We ate it in an open-faced sandwich with very thin crispy bread. Butter the bread, pile on the potatoes, cut the fish into tiny pieces and place it on the potatoes. We also added onion, tomatoes and sour cream. UMMMMM. It mostly tastes like salt, but there is a flavor that grows in your mouth and stomach that I can’t describe! Leftover food is thrown away because the smell and taste infuse it all. It was a very fun evening at our friends’ home, but our tummies were talking to us about it late into the night!

So what else are we doing besides eating sour fish? Our boxes finally arrived last Wed, but badly damaged! We knew they were damaged in the States, but still were shocked at the sight of them. Some things were outside of the boxes, many had been opened, with lots of torn and crushed boxes. Thankfully, not much was damaged but things are missing. Unfortunately, we may not know all that was taken until we are back in the States and see what we left there. So we are now carefully going through everything and compiling a list of the damaged and the missing. We’re also putting together furniture from IKEA and more will arrive later this week to be built! And we have a couple of painting projects we’re working on together as a family. Pray we will also be faithful in our Swedish studies in the midst of everything else.

We took the girls to Leo’s Lekland (Play land) to celebrate the end of summer. They started school yesterday in different classrooms. It just doesn’t yet seem right to be going to school in August. The weather has definitely become colder (highs in the 50’s) so that helps. They are in Välkomsten (the Welcome School) which is the school for kids who are immigrating to Sweden. Here they will learn Swedish, then when the teachers feel they are ready (probably between 3 months and a year) they will go to the regular public school. Everything is in Swedish so it is a challenge. Please pray they will catch on quickly. For Jensina, pray that she will stand strong in the Lord and have a Godly influence and leadership on her classmates rather than vice versa. She is the youngest in the class. Also pray that she does her homework and English and math that Gwen will be teaching in the afternoon with a good attitude – this is often a struggle for her. For Jiana, pray that as she stands strong in the Lord and makes the effort to become friends with the other children and thus be a Godly influence.

Pastor Richard and leaders of the church in Kiruna

Last Friday and Saturday, Tony traveled with our pastor (Richard) to Kiruna – 90 miles above the Arctic Circle. Three local pastors have been going there to help a church in this mining town of 18,000 get back on its feet. It was great to listen to these people who love God so much as they prayed for wisdom and discernment regarding the future of the church. The temperature is already dropping in Kiruna, but the hearts of the people in this church continue to be on fire for the Lord. This land is being reclaimed by God as His own and we are privileged to be part of His work!

The four-hour drive each way allowed Tony and Richard to really get to know each other and to share some of our visions and dreams for this region. We saw several reindeer lazily walking onto and across the highway we were on with obviously no fear of cars. Richard stated that most of these animals belonged to herders and were allowed to freely roam. And of course, there was also the obligatory stop at the sign marking the exact line of the Arctic Circle.

The Martins can’t wait to come back to see the spectacular beauty of this region in the winter! In the meantime, we’ll pray for the church there. Will you join us?

Last weekend Luleå held their eighth annual festival celebrating food, games and entertainment that drew thousands of people from the town and surrounding areas. Several churches have used the opportunity to set up a tent in the middle of the busiest pedestrian area and offer food and a place people could listen to Christian bands, hear testimonies and just sit and hang out. Inside and around the tent, people mingled with the crowd, talked with them and sought ways to spread the gospel.

Main pedestrian walkway at the festival. The orange tent is where Tony shared about Jesus.

Tony was there Saturday night and saw so many who were with other people, yet seemed so lonely. We’ve been told that when girls here turn 13 or 14, their parents give them keys to the house and allow them to come home whenever they want to. Many even fix up the basement as a room where their daughters can “entertain” their boyfriends for the night.  This is simply seen as a normal part of growing up in this land. Tony personally saw so many in their early teens roaming the festival grounds – even at 4:00am – and he prayed God would keep them safe.

Tony was part of the tent outreach ministry and was able to share Christ with about seven people – he couldn’t believe how receptive people were. Most of the people knew about God, but had no desire to know Him personally – they held on to the false hope that God would allow them into heaven because He forgives everyone and they had done more good than bad in their lifetime.  One fellow said he thinks about what will happen after he dies every night and it concerns him. Another young fellow has a Muslim father and a Christian mother and said he knew both religions well and the “only” difference between them is how Jesus is seen – he said he’ll choose his religion later when he doesn’t have so much on his plate.

We sense a real spiritual battlefield here in Luleå with eternal destinies at stake. However, we know God has not turned his back on these people! The Holy Spirit is piercing hearts as evidenced by people’s questions and willingness to listen. We continue to need your prayers so God will use us for His glory! 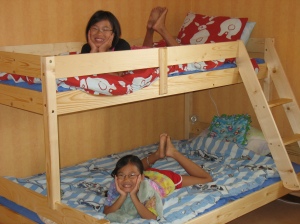 Finally got the bunk beds assembled – IKEA style! If you don’t know, this type of directions have no words and a few scarce pictures with arrows haphazardly pointing at seemingly unimportant areas of the diagram. They also include some rather interesting tools that usually self-destruct by the end of assembly.

The girls are already planning how the dog and cat will sleep with them in the bunks. Tony and Gwen foresee many mornings with overly tired daughters!